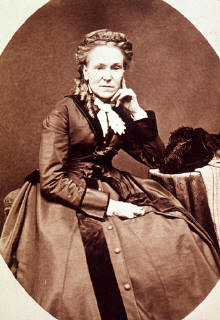 Matilda Joslyn Gage, an early leader in the women’s movement, planned conventions, organized state political parties, spoke at Congressional hearings and at the White House, and wrote books that are still being studied today. In 1876 she risked arrest by disrupting the Nation’s Fourth of July centennial celebration to present a declaration of women’s rights. In 1886 she demonstrated at the dedication of the Statue of Liberty, saying women had no liberty in this country. In 1893 she was arrested for registering to vote. Matilda worked closely with Susan B. Anthony and Elizabeth Cady Stanton, but these so-called friends betrayed her late in life and wrote her out of history. This program, with historical and contemporary photos, is especially suitable for Women’s History Month, International Women’s Day, and for events celebrating the coming centennial (in 2020) of women’s suffrage in the United States.

ANGELICA SHIRLEY CARPENTER, Curator Emerita of the Arne Nixon Center for the Study of Children's Literature at California State University, Fresno, published four middle-grade biographies, Frances Hodgson Burnett, L. Frank Baum, Robert Louis Stevenson, and Lewis Carroll (all from Lerner Publications); In the Garden: Essays in Honor of Frances Hodgson Burnett (Scarecrow); a biography, Born Criminal: Matilda Joslyn Gage, Radical Suffragist; and a picture book, The Voice of Liberty, illustrated by Edwin Fotheringham, the last two published by the South Dakota Historical Society Press. A past president of the International Wizard of Oz Club, Angelica is an advisory board member for the Lewis Carroll Society of North America and a member of the American Library Association, the Society of Children’s Book Writers and Illustrators, the Authors Guild, and the League of Women Voters. Her website is www.angelicacarpenter.com.